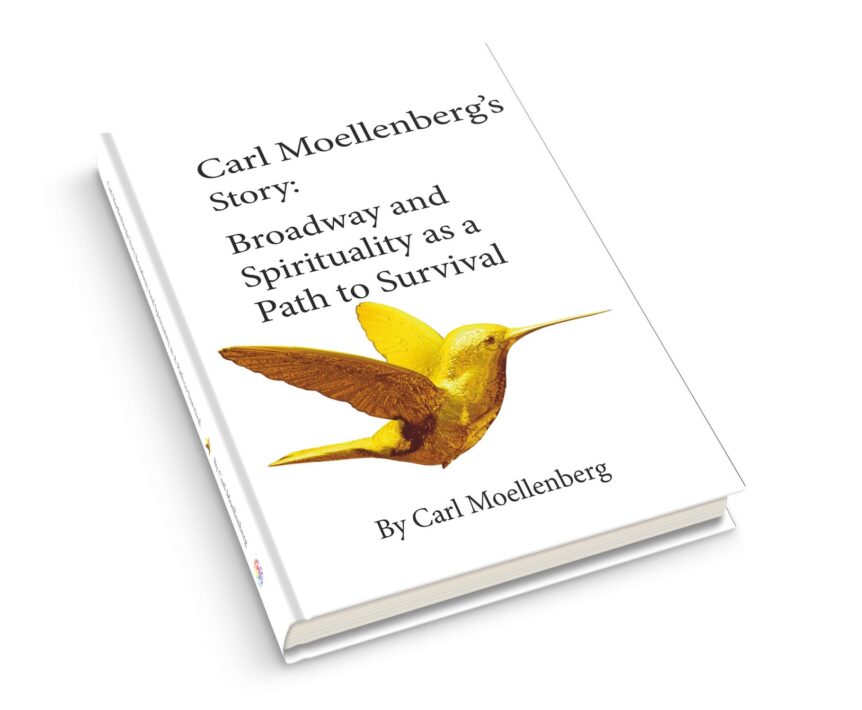 FOR IMMEDIATE RELEASE ON AUGUST 4, 2022, PLEASE

“CARL MOELLENBERG’S STORY: BROADWAY AND SPIRITUALITY AS A PATH TO SURVIVAL”

A MEMOIR FROM 13-TIME TONY AWARD ®

NOW AVAILABLE FOR PRE-ORDER ON

AMAZON, BARNES & NOBLE AND OTHERS

New York, NY (August 4, 2022) – Tony Award-winning producer Carl Moellenberg’s memoir, Broadway and Spirituality as a Path to Survival, will be released on Saturday, October 1, 2022, by Imagine and Wonder. It is now available for pre-order on Amazon, Barnes & Nobles and others.

Moellenberg’s story is one of overcoming enormous obstacles and changing course to find his passion and true self to live joyously as a long-term survivor. It is a journey of many transformations: from Midwestern boy most interested in music to a fast-paced Wall Street career; from investment banking to becoming a 13-time Tony Award-winner on Broadway; from overcoming several death-defying crises by finding healing, inspiration from a higher-being and deeper spirituality. Moellenberg hopes his story will inspire others who face seemingly overwhelming obstacles to find their passion, reason to live, and to find love.

Moellenberg grew up in Ohio and then transitioned to the world of NYC financial institutions for 19 years. A combination of passion for music and serious health issues and spiritual inspiration caused him to jettison that life for producing theater on Broadway. Since that most joyful life-changing decision, he now has produced over 70 shows worldwide and won 13 Tony awards. His incredible path was accomplished despite multiple threats to his survival which were warded off by his passion for Broadway, newfound healing practices, spirituality, and love.

A NOTE FROM THE AUTHOR

“For many years, I’ve had wonderful friends who were constantly prodding me to write a story about my life. I don’t view anything about myself as extraordinary.  I also know so many people are dealing with debilitating health issues, as I have been for over 40 years.  My friends believe I might be able to provide inspiration to others by sharing my personal journey.  These experiences have created the person I am today. This is my life story—one of resilience, transformation, perseverance, surviving, adapting, healing, spirituality, love, faith, finding my passion and realizing dreams. It is a story about facing daunting obstacles head on and not losing hope.“

ADVANCE PRAISE FOR “BROADWAY AND SPIRITUALITY AS A PATH TO SURVIVAL”

“It’s a story of inspiration, truly. Of sadness and joy, of growth and spirituality, and ultimately of acceptance. The blending of worlds, a seeming dichotomy that Carl has woven together into a spectacularly vibrant life. Reading his beautiful book has touched me deeply.” – Barbara Manocherian, President—New York Stage and Film

“I first met Carl Moellenberg on Spring Awakening and we have worked together a number of times since. What a pleasure to read this memoir. It is full of heart, told with great honesty, in strong, clear, simple language. His fortitude and optimism in the face of adversity is an inspiration.” – Tom Hulce, Actor/Producer

“Carl’s story is one of finding profound passion in storytelling and bringing those stories to life. His memoir is searingly honest about his health struggles, but what stands out is how these challenges have consistently inspired him to live a fuller life; connect more deeply with people and work with the best artists to help deliver their vision. It’s a lesson in defining one’s life not by its challenges but by what -and who we love.” –Tim Levy, Broadway and London Producer

“I am so honored Carl shared this very personal work with me. It is a beautiful experience to read. Not just because I consider Carl a friend, but because it is an exercise in authentic vulnerability, and the world needs so much more of that. If there’s one thing his memoir showed me – or really, affirmed what I already knew about him – it’s Carl’s incredible Goodness, which I use with a capital G. He is one of the most pure, kind and good people I have ever known. Carl’s willingness to be so open and vulnerable around his survivorship, his spiritual path, his artistic path, and his close friendships allows the reader a sense of honor to be included in his journey.

I think this memoir can and will help people (in a universal sense) to feel less alone and inspire them to follow themselves and their dreams.” –Adam Kantor, Broadway actor

Carl Moellenberg grew up in Ohio where his interests included music (classical piano and singing) and sports. A graduate of Denison University, Moellenberg graduated co-valedictorian with majors in economics and math. He later received his MBA at the University of Chicago in Finance with highest honors. Moellenberg moved to NYC in 1976 into the world of banking and investment banking where, over the next 19 years, he provided financial analysis, internal consulting, planning, merger implementation and corporate finance services at some of the industry’s leading banks including Chemical Bank, Goldman Sachs and Morgan Stanley. After a successful career in banking and investment banking, Carl took some time to travel and pursue his new major interest in spiritual healing. This practice taught him to calm his mind and balance himself – skills necessary for recovering from the grueling time in his career and to survive the life-threatening opportunistic illnesses which resulted.

It was during this time that Carl had the opportunity to reflect on and listen to words from a higher being regarding where his life was going to take him next… Broadway, which saved his life.

When Moellenberg returned to New York, he began to study at the Commercial Theatre Institute where he gained mentors and partners which propelled him into theater producing Carl turned what started out as a hobby into a true passion, as part of the producing team for some of the biggest hits in recent Broadway history. He is now a 13-time Tony Award-winning producer for some of Broadway’s most successful shows: Spring Awakening, War Horse, Hair, Death of a Salesman, Pippin, All the Way, The Curious Incident of the Dog in the Night-Time, Dear Evan Hansen, Angels in America, The Band’s Visit, Oklahoma, Hadestown and Company. His aim has always been to tell compelling stories or to present stunning music which transforms people.

Recently, Moellenberg has turned from co-producing to lead producing and has several more projects in development. Throughout his career, he has produced or invested in over 110 theater productions with a very high financial success rate. Moellenberg has since expanded his role in the arts through the formation of Dominion Pictures, a production company for film where he has already produced multiple films with several more currently in the pipeline.